What I learned by fixing my pool heater

I bought my first home in February, and it came with a pool. I had never before in my life owned or maintained a pool. The inspector diagnosed a broken pool heater, which the owners replaced with a top-of-the-line Pentair MasterTemp 400. It runs on natural gas and uses the same connection that had been installed for the previous heater.

The previous heater was much smaller, and the gas supply that had been installed to feed it was inadequate for the beastly new heater. The installer let me know that if I turned the heater on, it would not burn the fuel completely, leading to soot formation and damage to the heater. He told me that I needed to upgrade my gas meter, but I never got an explanation of how or why (he stopped returning my emails, I guess because I wasn't the one who hired him). Here's what I learned.

The gas meter has a volumetric flow capacity, colloquially abbreviated to just "volume", measured in cubic feet per hour (CFH), stamped on its nameplate. Mine is rated for 425 CFH. 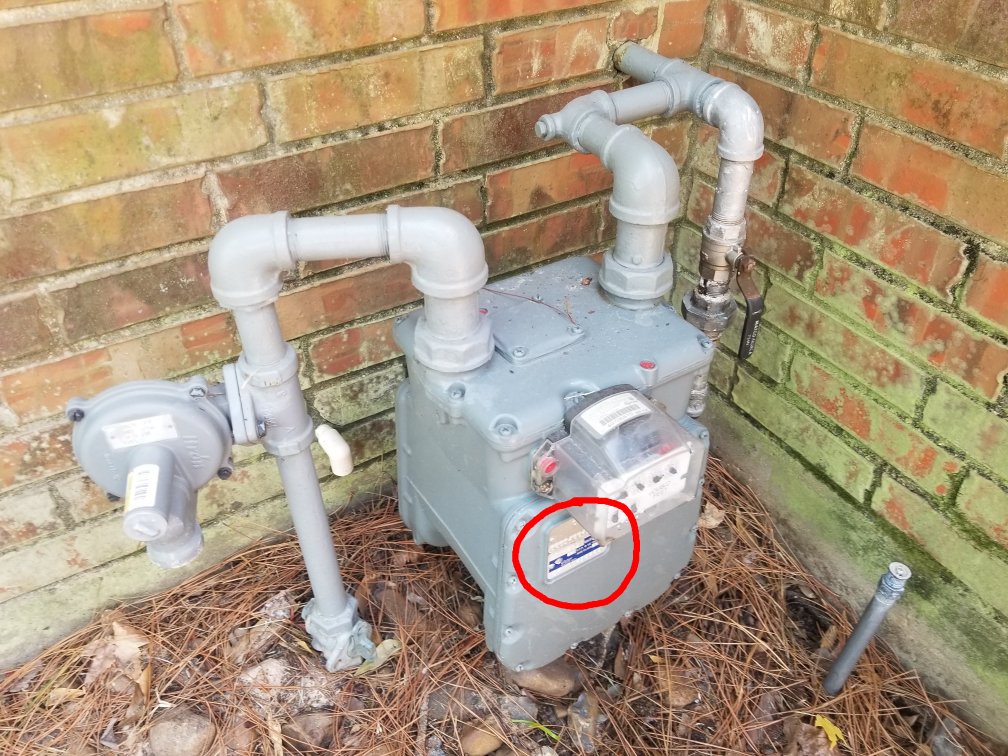 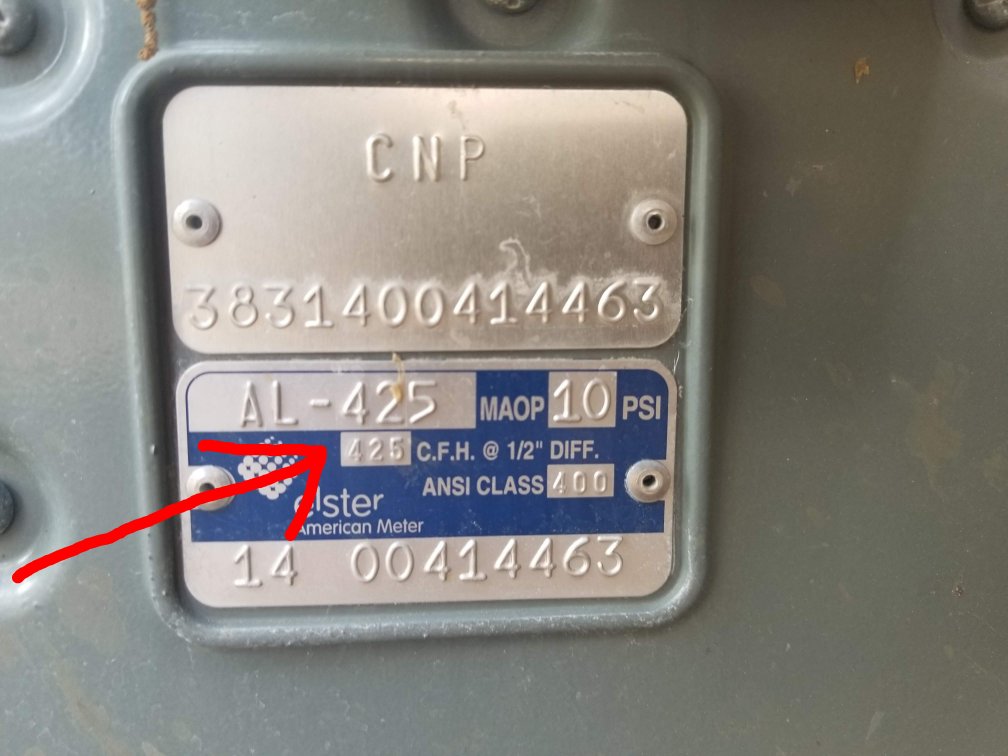 The "400" in MasterTemp 400 means that my pool heater is designed to produce 400,000 BTU of heat. Each cubic foot of natural gas produces about 1000 BTU, so that means my heater consumes around 400 CFH, which means my meter can deliver enough gas for my pool heater and pretty much nothing else at the same time. If any other gas appliance in my home, like a water heater or furnace, turned on while I was running the pool heater, then both appliances would start producing soot. I needed to upgrade the volume of my meter.

To figure out how much volume I needed, I had to collect a list of all the gas appliances I owned with their BTU ratings. Some appliances, like my water heaters and furnaces, had the number embedded in their model name, e.g. a Bradford White MI40T6FBN water heater producing 40,000 BTU or a Bryant 313ABV060110 furnace producing 110,000 BTU. I learned this fact by checking their manuals, which the previous owner had thankfully passed on to me. Other appliances, like my fireplace, I just had to take a guess based on window shopping for replacements. I plan to eventually convert my kitchen from electric to gas, and to add an outside connection for a grill, so I included estimates for those appliances as well. I ended up with the table below.

The total comes out to be 996 CFH. That's how much all of these appliances would need if they were all running at the same time. That coincidence is very unlikely, but it costs the same to upgrade the meter to 80% of that capacity as it does for 100% of it.

Besides flow, the other factor to consider is pressure. Natural gas pressure in the United States is commonly measured in either pounds-per-square-inch (PSI) or inches-of-water-column (IWC). My heater is protected by a pressure regulator that puts out 6 - 15 IWC. 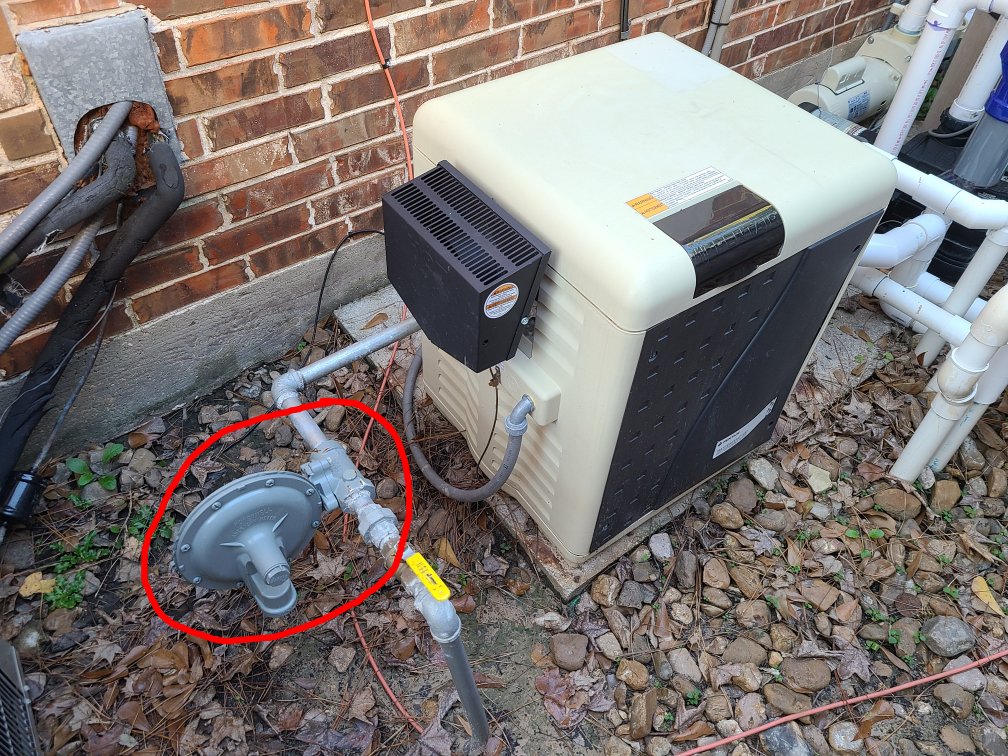 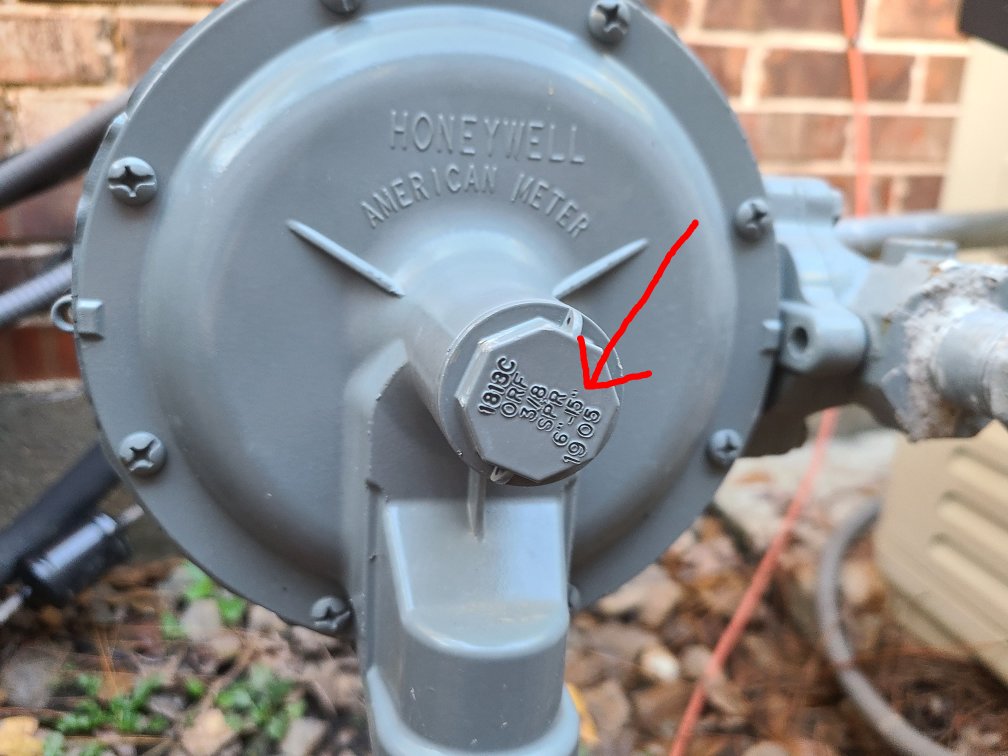 For residential applications, this range is considered "low pressure". All the appliances in my home (and in most homes) run on low pressure. That is why the gas company installed a low pressure regulator before the meter itself. 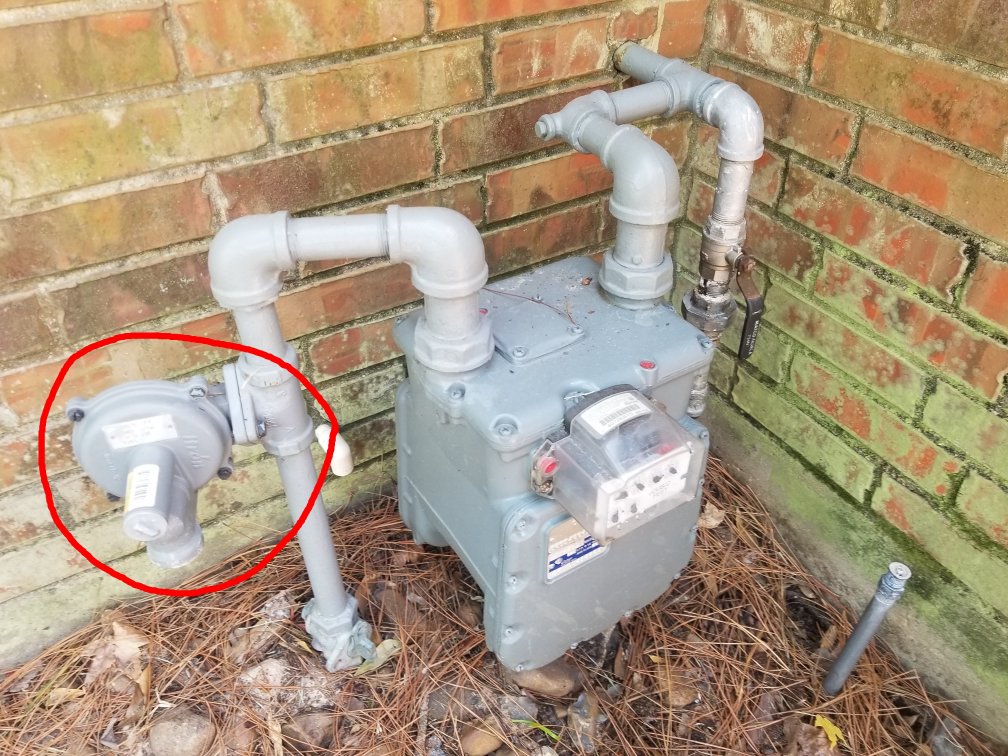 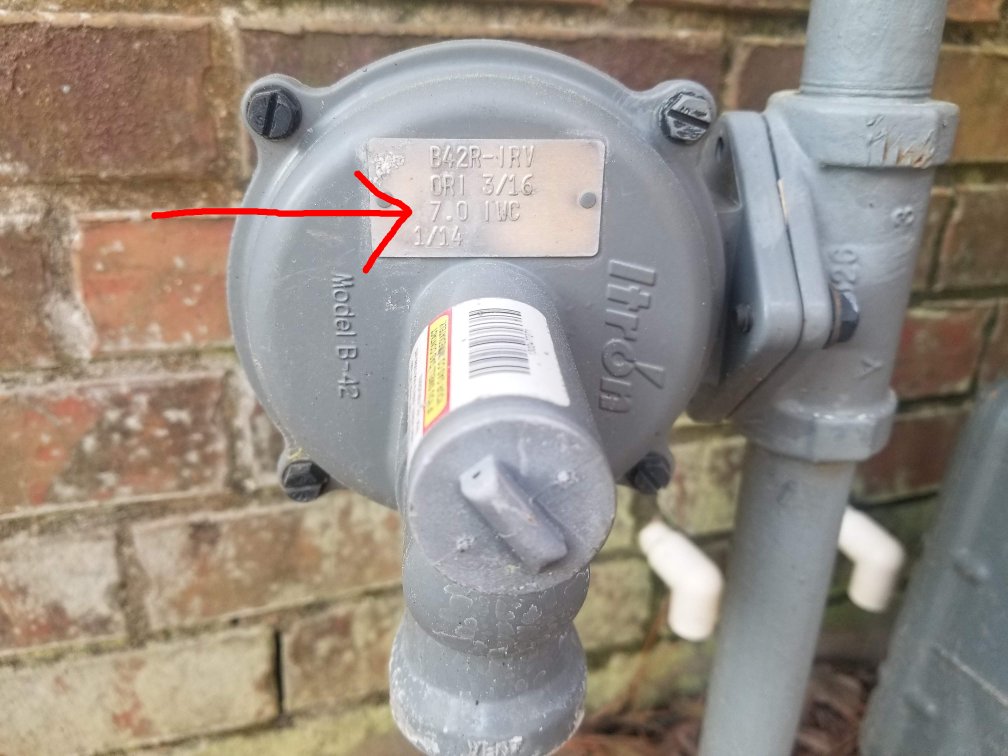 I looked up the manual for the MasterTemp 400. On page 15 is a chart: Stage Two "Low Pressure" Gas Pipe Sizing. To use this chart, I needed to know the smallest diameter pipe between the meter and the heater, which happens to be the pipe that runs underground. I measured the outer diameter of that pipe with a digital caliper, then looked up that measurement in a table I found online to get the nominal size. With an outer diameter of 1.05", it is 3/4" pipe. 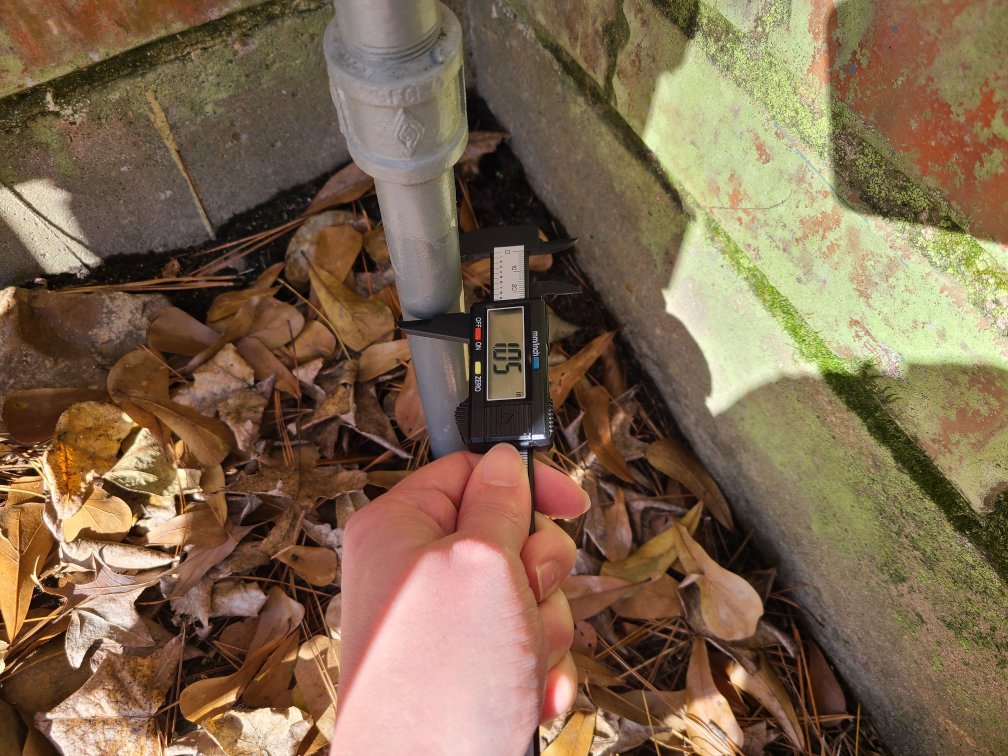 Consulting the table in the manual, there is NO acceptable length of 3/4" pipe that can supply enough natural gas to the MasterTemp 400 at low pressure. I could have tried burying a new larger-diameter pipe, but I figured it would be easier and cheaper to just upgrade the meter to "high pressure" (2 PSI or 55 IWC). 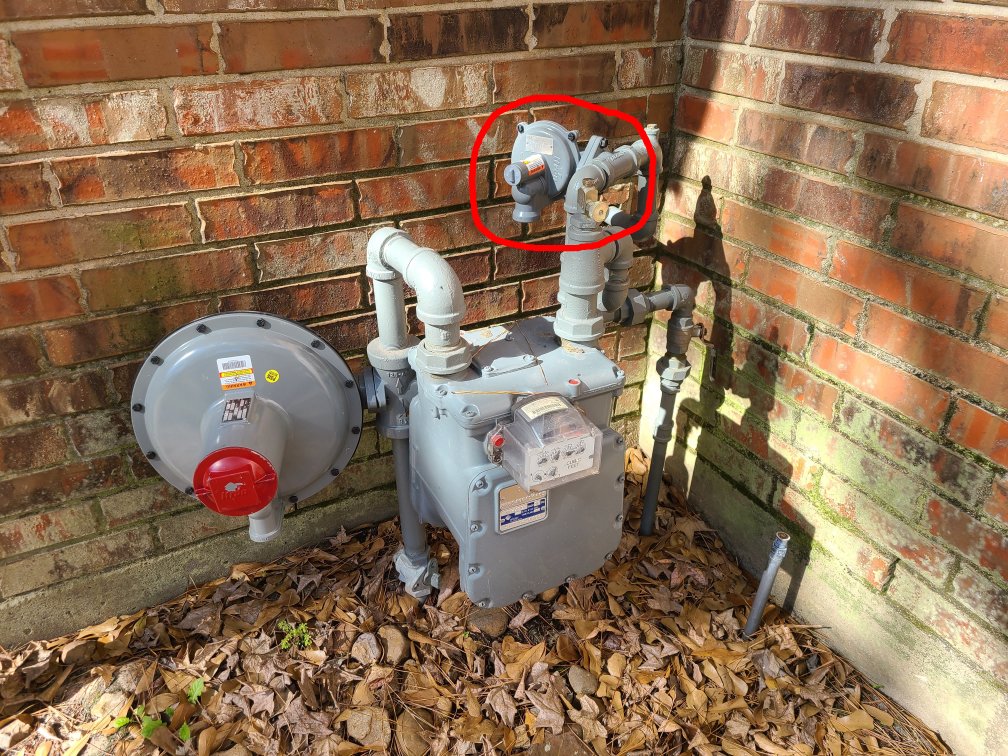 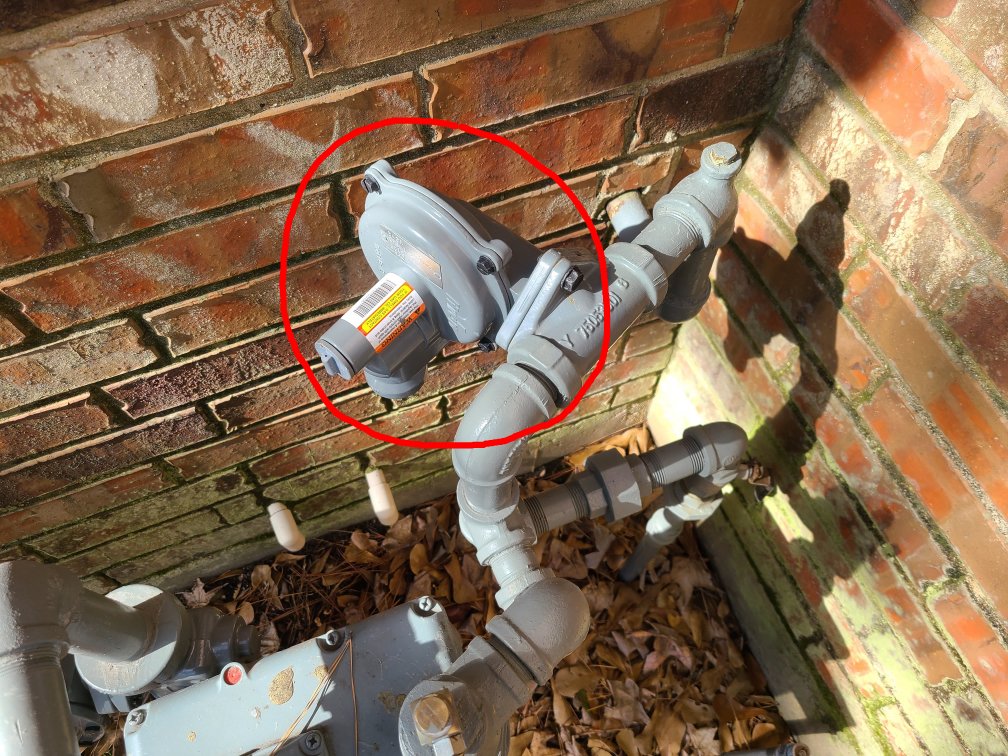 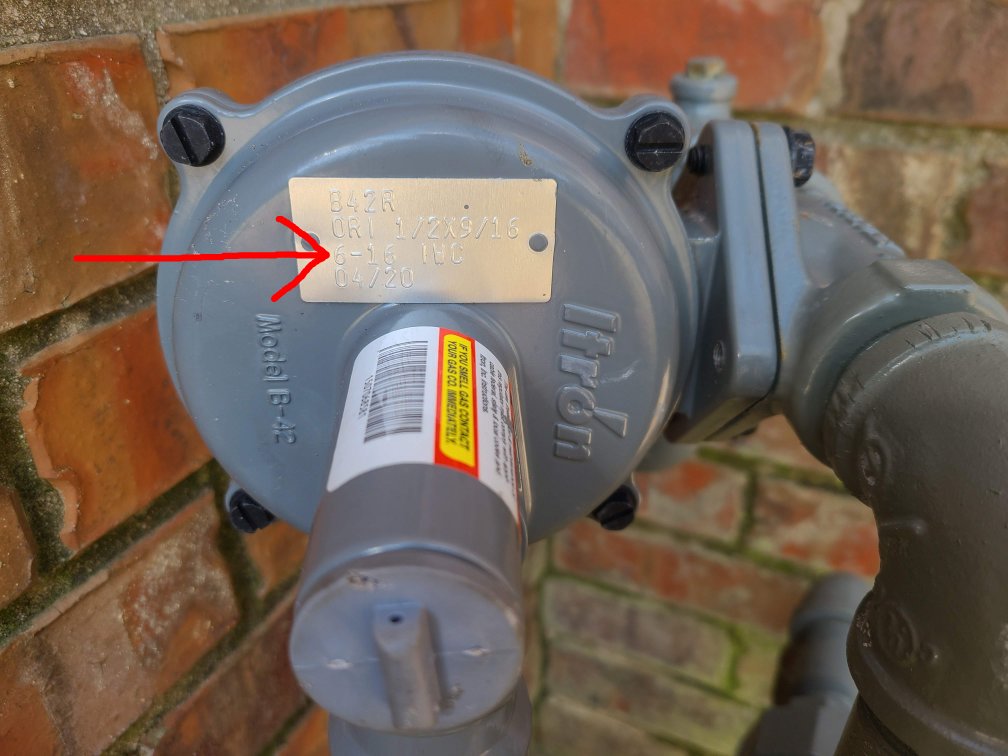 Then I called my gas company, Centerpoint Energy, to upgrade the meter, both for pressure and volume. They charged me $350. 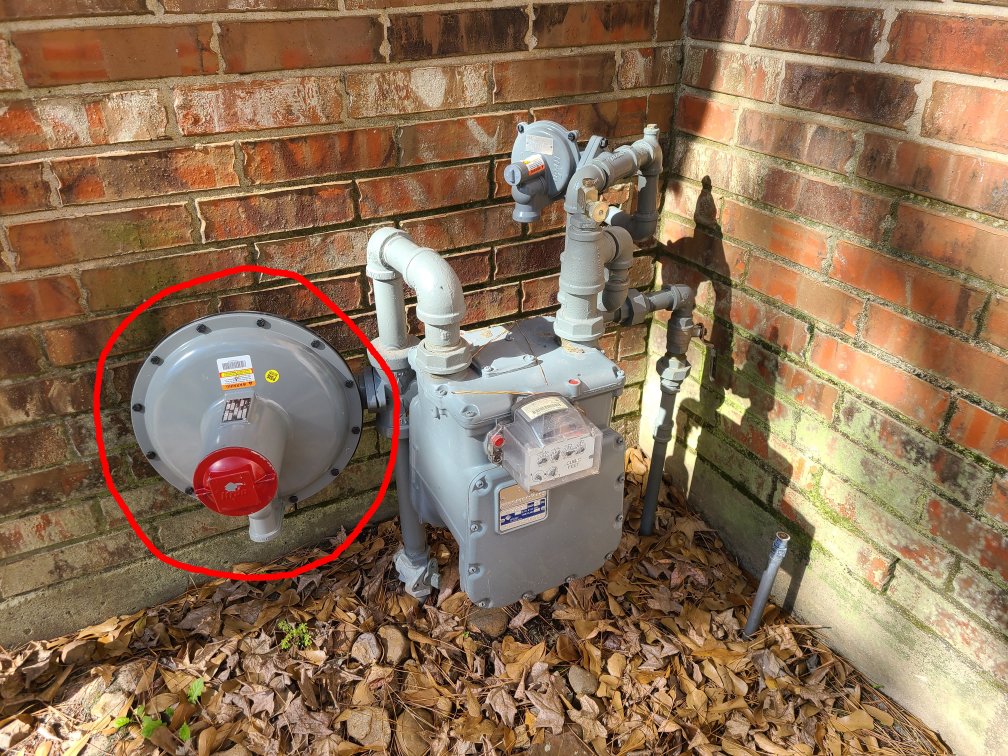 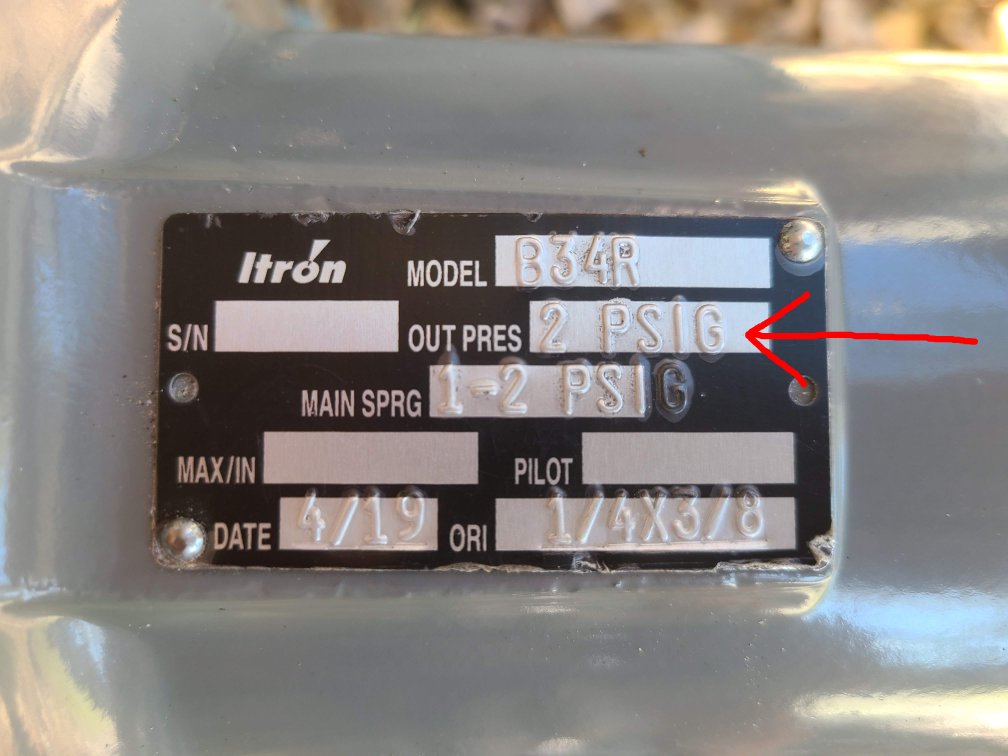